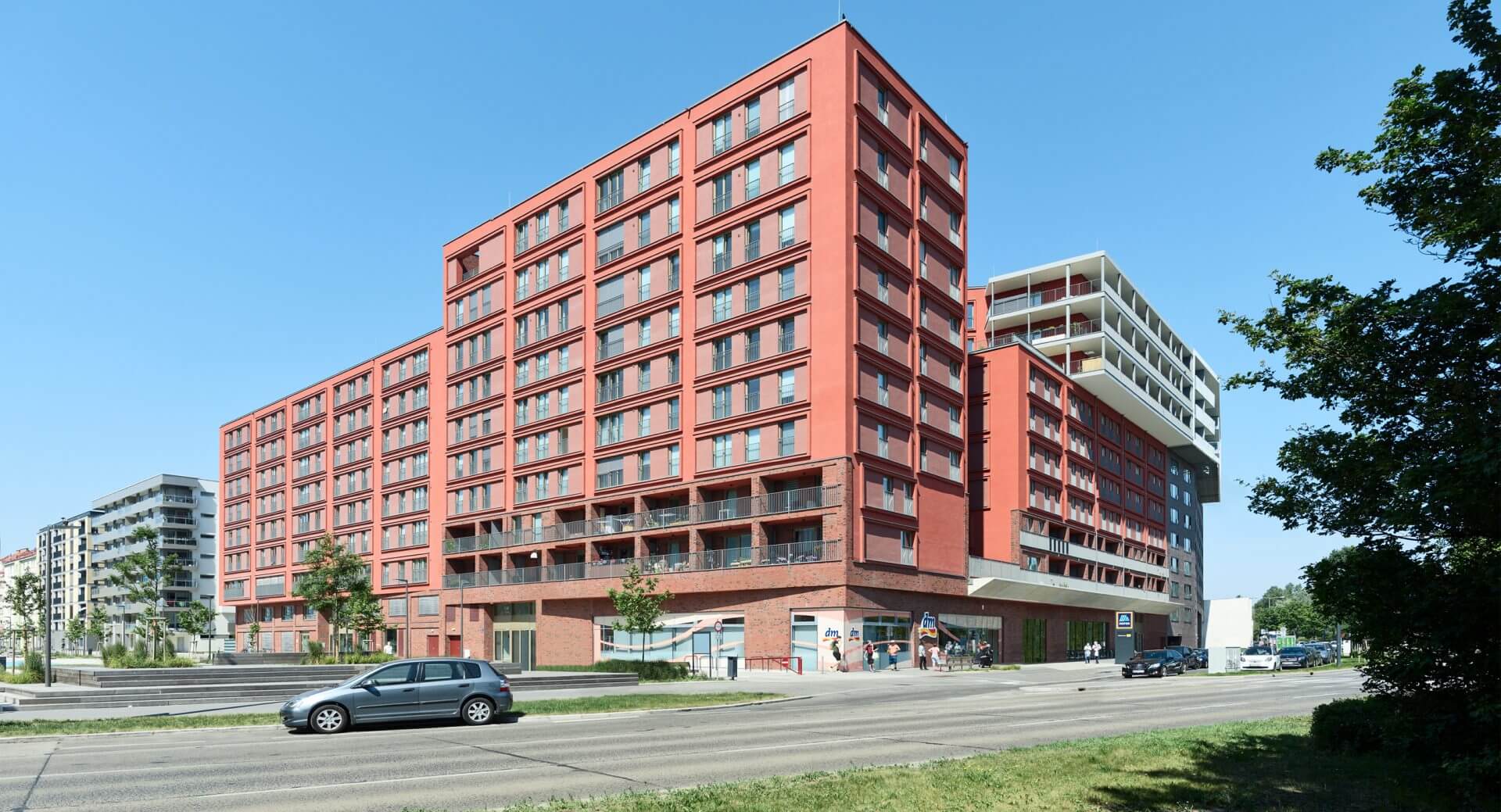 Seven renowned architectural firms have designed ten individual buildings according to architectural guiding principles by BEHF Architects. Thanks to the well though-out concept, THE ENSEMBLE presents itself as a lively, varied and modern residential area; privately financed, but based on the qualities of the Vienna housing model. Directly on the Danube Canal, opposite the recreational and leisure area of the Prater, about 800 high-quality apartments that blend seamlessly with an expansive surrounding park space are available.

The project offers a rich mixture of townhouses, family residences, apartments with gardens, temporary apartments, alternative forms of housing, as well as shops for the daily needs. The main urban development elements of the new traffic-free zone are the definition of the new edge of the city and a vast area of open spaces. Amounting to approximately 21,500 m², the open and landscaped park areas make up 2/3 of the entire building plot. 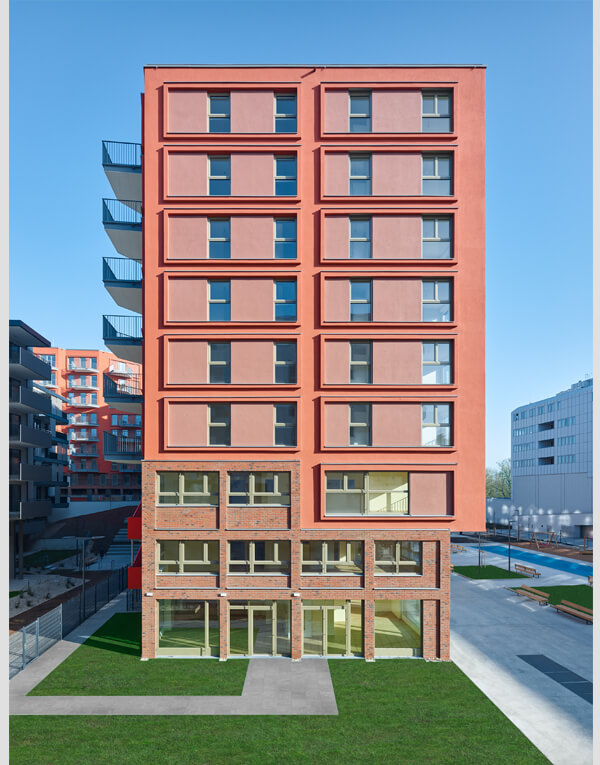 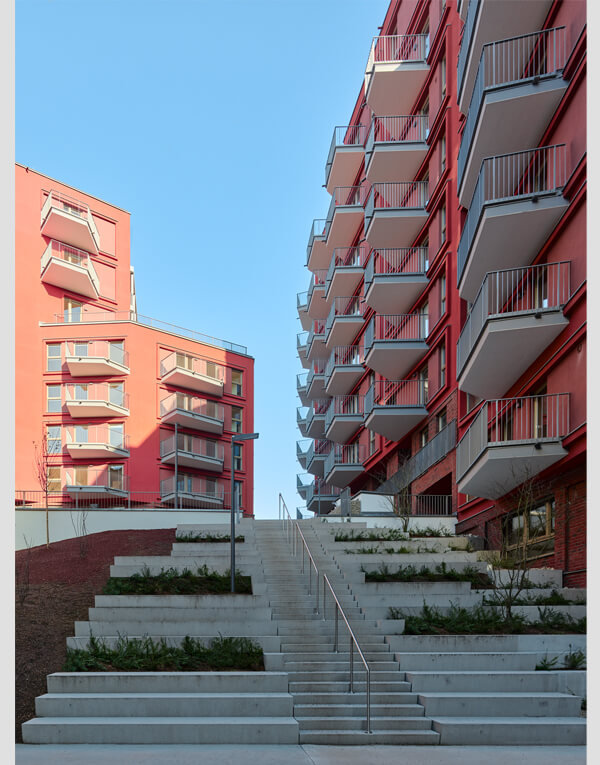 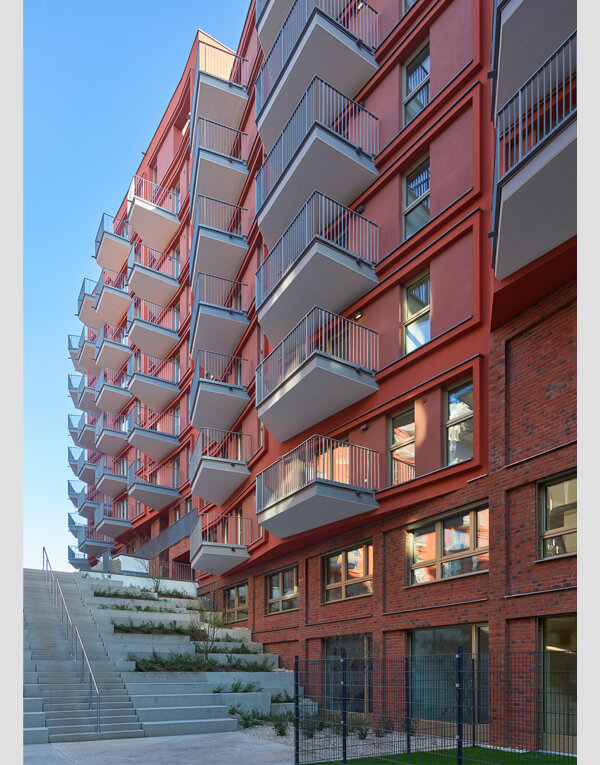 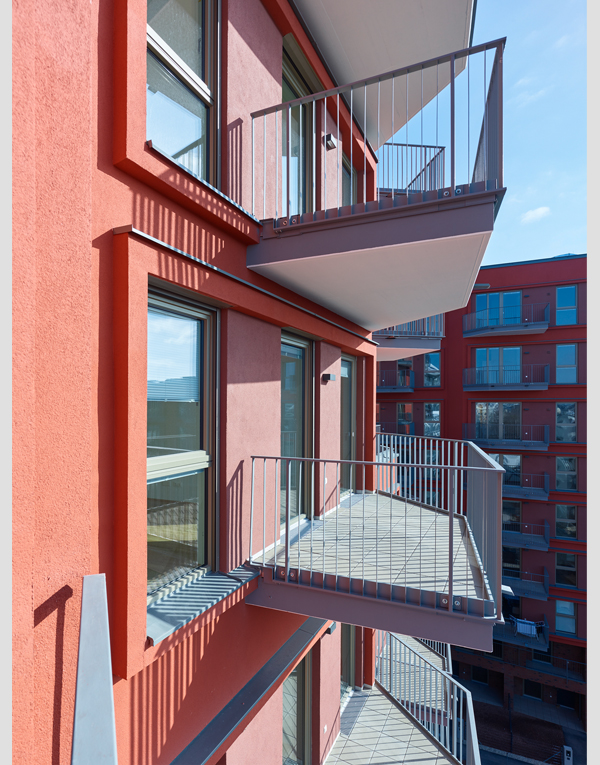 In addition, BEHF Architects has created two residential buildings on the building plots 8 and 9 that represent the most appealing area of the development site. Featuring striking red facades, the structures subtly reference the history of the district as a commercial zone. The buildings are divided horizontally according to a classical tripartite scheme into a plinth zone, middle floors with a variety of apartment types and a top penthouse floor. The exterior of the plinth levels is clad in high-quality red brick, while the middle part and the penthouse floor are covered with red-rendered facades. The buildings feature decorative mouldings around windows, patios and balconies. Organised in an orthogonal grid pattern upon the facade, these lend a characteristic appearance with high recognition value to the ensemble’s exterior. 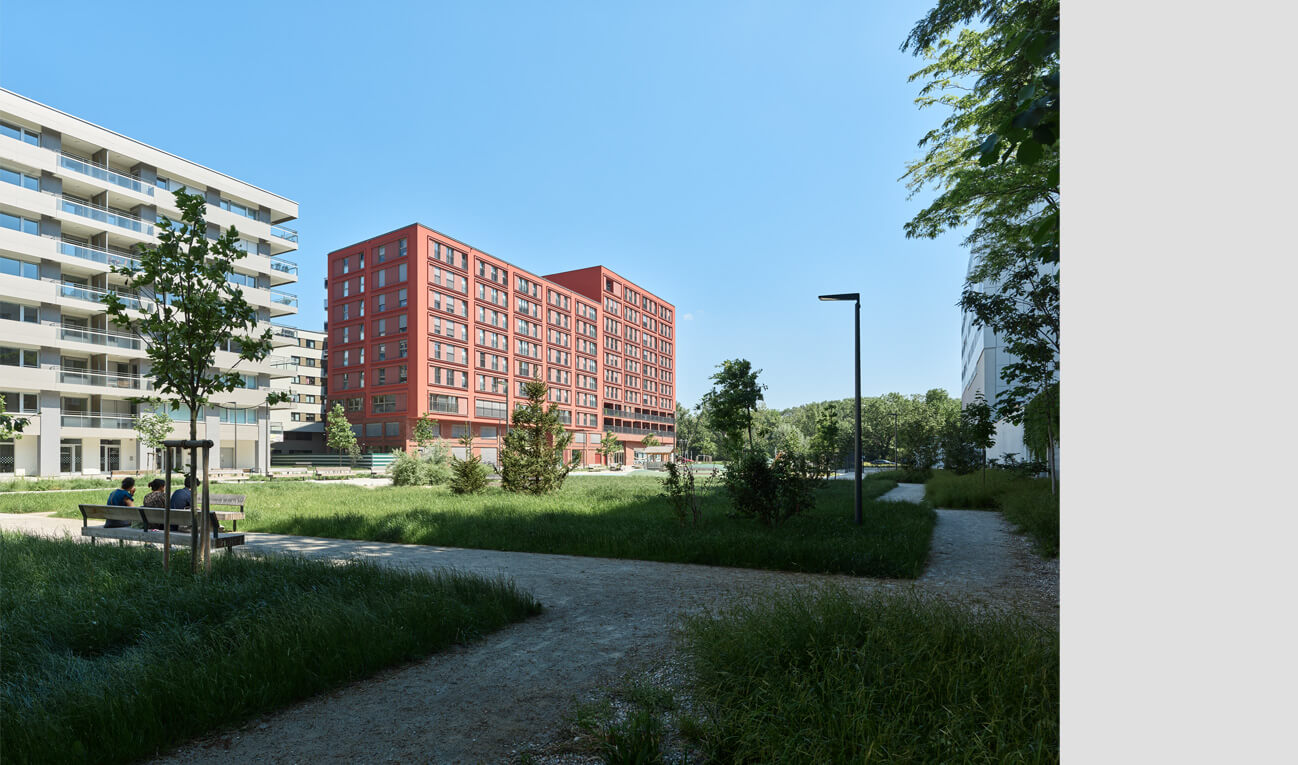 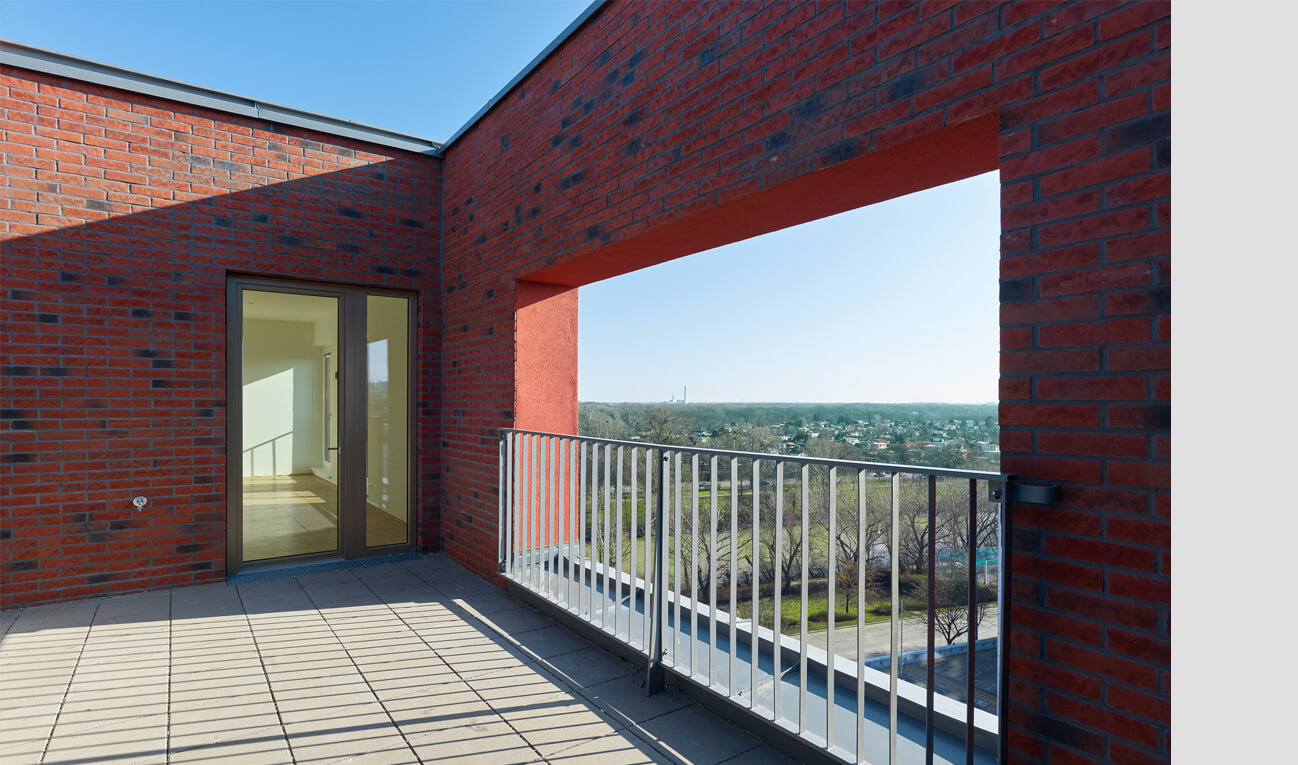 While the buildings make a clear strong edge along the streets and the parking area, the side facing an intimate inner courtyard appears “softer” with its wavy bay windows and cantilever balconies.

The building on the plot 8 is accessed via two-storey entrances from the sculptural plinth base. A kindergarten with direct access to the playground in the courtyard is placed in the plinth zone. The residences consisting of two, three or four bedrooms are distributed over the floors above. Each apartment has a separate large open space in the form of balconies or patios.

The building on the adjacent plot 9 is divided, above the two-storey plinth, into two individual building units. The open spaces between the two units dissolve the perimeter block housing and enable stringent floor plans. A spacious retail area for local supplies is located in the plinth zone. On the floors above, there are so-called “townhouses” generously equipped with separate private gardens. The apartments distributed over other floors of the building are similar to those in the building on the plot 8 and provide open spaces.

The highest point of the complex on the corner of Erdberger Lände / Drorygasse expresses itself clearly as a strong architectural signal within this new urban destination in Vienna. 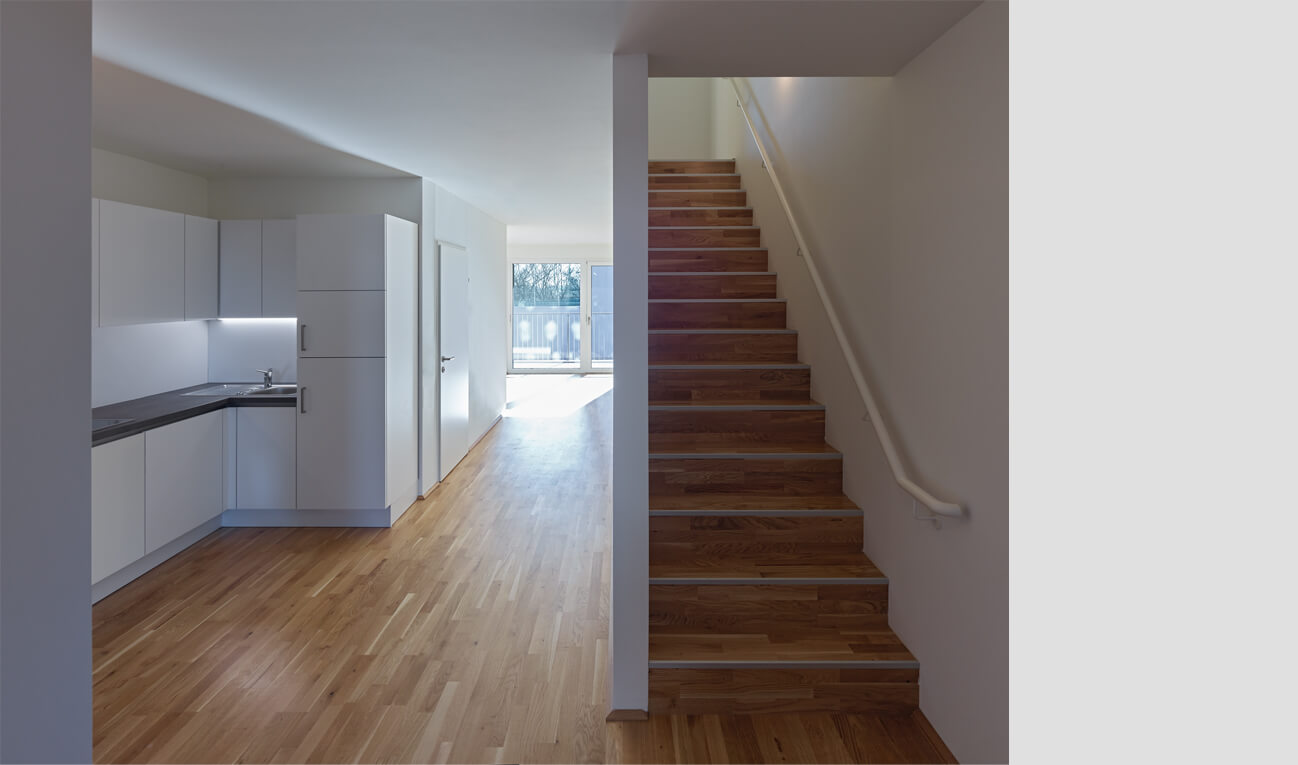 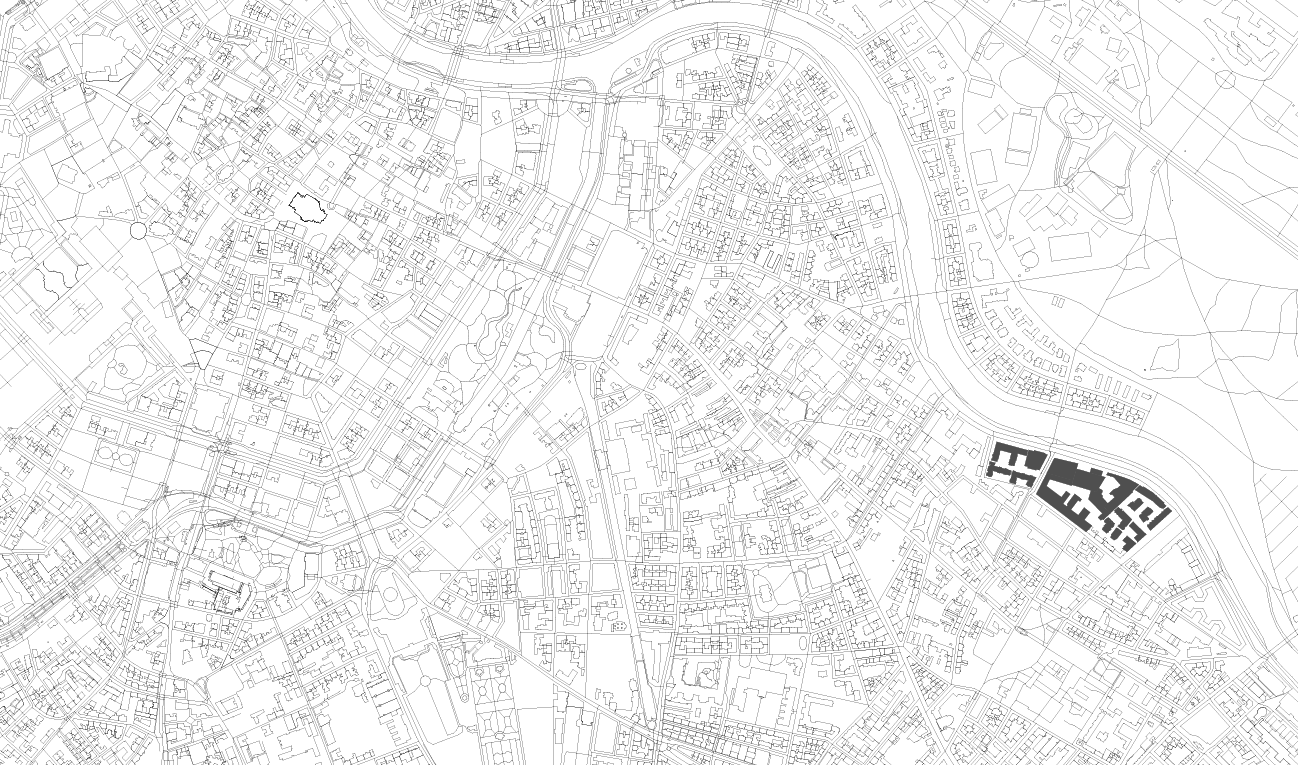 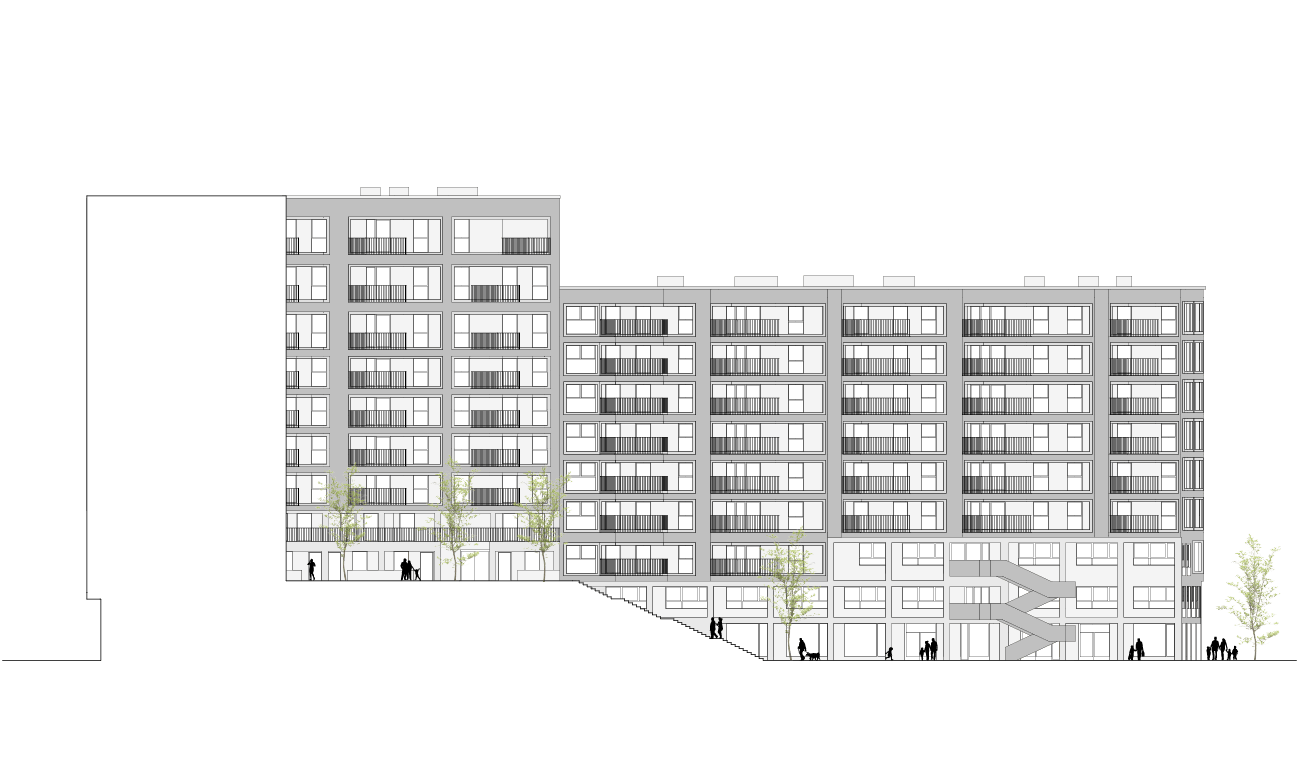